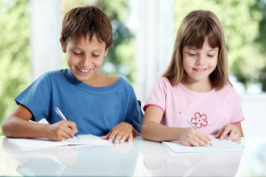 Think back to when you were in middle school and high school. Do you remember the boys generally being better in some subjects, while the girls were typically better in others? This difference in gender-based learning can be attributed to cognitive and social factors in an adolescent's life.

The article "Boys and Girls Together: A Case for Creating Gender-Friendly Middle School Classrooms" by David Kommer gives the reader insight into some of the cognitive and social differences in adolescent boys and girls. Kommer (2006) explains that the makeup of male and female brains are different, which is why females mature more quickly than males. This difference in brain structure could also be the reason why males are more likely to be involved in risky behavior. Not only are males' and females' cognitive constructs different, but their social behavior is typically unique as well .

Kommer (2006) explains that society and the expectations we put on our adolescents shape who they are socially. Generally, we expect males to be strong and conceal their emotions. On the other hand it is perfectly acceptable, and in many cases expected, for females to show their emotions. This article lists other differences, but offers suggestions to teachers as well. Kommer (2006) suggests that, "it is critical that teachers know the differences and structure the learning environment so that the students' work sometimes reinforces individuals' stronger areas, and sometimes strengthens a weaker one," (p. 251). He explains that both genders can learn from each other, so it is important to cater to males' social and cognitive needs for some activities, then focus on females' needs for others.

Many researchers have claimed that girls are about a year and a half ahead of boys in literacy skills, but Christina Gardner rebuts that finding. She refers to Howard Gardner's multiple intelligences theory when explaining the program "Kid Writing Curriculum,” (Gardner, 2010). This program allows students to choose whether to work in groups, pairs or individually to develop their literacy skills. By allowing the students to choose to be up and moving, or stationary while developing their writing she is allowing them to choose which style of learning works best for themselves. By the end of her study, Gardner (2010) reported that both boys and girls had significant gains in literacy skills, and there was not a significant gender-based gap in literacy learning as previously thought. This study shows that if we can allow our students to choose to learn in a way that is best for themselves, then all are capable of learning at the same rate.

Typically, boys are more restless than girls, and learn better through spatial activities, while girls usually learn better using their literacy skills. As Gardner's (2010) study shows, this may be due to our mode of teaching. If we can find a way as teachers to include as many types of learning as we can, then we give all of our students, regardless of gender, the best opportunity for learning. I do not have a magic answer for what this looks like, but I know that if we are attentive about what works in the classroom, and what does not work for that matter, then we will figure it out as we go.