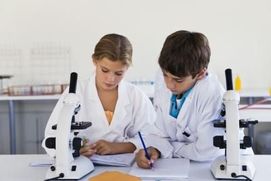 In today’s classrooms one of the most important aspects of teaching children is gaining their attention from the outset. After all, how can a student learn if they are not paying attention? Gaining the student’s attention is not referring to behavior management, but rather to activities that provoke curiosity, questioning, and the recall of newly learned information (Fisher & Frey, 2012). Student attention is best gained through anticipatory activities, which should be tied to the introduction of the next lesson, not just an activity that takes up the first five minutes of class time.  There are several anticipatory activities available to teachers, which include:  demonstrations, discrepant events, anticipation guides, visual displays, and thought-provoking questions.  These types of anticipatory strategies can enhance the learning and retention of student knowledge, and can help to motivate and stimulate student curiosity about the lessons being studied (Fisher & Frey, 2012).
Discrepant Events
A discrepant event is a demonstration that involves a surprising or startling occurrence designed to gain the student’s attention. A good discrepant event will puzzle the observer and cause them to question why the outcome that is observed is not necessarily the one that was expected (Hoover, 2010).  In his article The “Magic” String, Todd Hoover, an assistant professor at Bloomsburg University of  Pennsylvania, uses a closed cylinder with four connected pieces of string sticking out from four different corners.  The top left piece of string is sticking out farther than the other pieces.  By having his students try and deduce what will happen when he pulls on the other pieces, Hoover is attempting to demonstrate to his students the difference between observation, an experience obtained through the senses, and inference, an assumption based on observation.  This activity is designed to go against what the students expect to happen when the string is pulled to create questioning and higher-order thinking by the students. 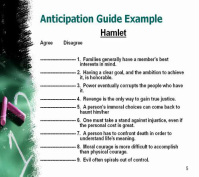 Anticipation Guide
Another excellent anticipatory activity is an anticipation guide.  An anticipation guide is a list of true and false statements connected to a reading from the class text prepared by the teacher. (Fisher & Frey, 2012). Anticipation guides can be used as a strategy to increase not only student content knowledge, but to increase student reading comprehension. This is especially important in middle schools as instruction focuses on subject matter proficiency rather than proficiency in reading (Kozen, Murray, & Windell, 2006). In their article, Increasing All Students’ Chance to Achieve, Kozen, Murray, and Windell, show how the anticipation guide can be used as a pre-reading strategy that combines literacy instruction and content-area learning.

The anticipation guide should include a combination of five to ten true and false statements related to the content.  Prior to reading the content, students will use prediction, controversy, and activation of prior knowledge about the topic to choose which the true and false statements are.  After the students have read the assigned passage, they will go back to their initial reactions, and will choose to change or maintain their original thoughts.  However, they must substantiate their decision by using information from the text to support their position (Kozen, Murray, & Windell, 2006).  Some of the statements in an anticipation guide should be clearly true or false, but a great anticipation guide will include statements that “provoke disagreement and challenge students’ beliefs about the topic” (Kozen, Murray, & Windell, p. 196).
Next, the author used Anticipation Guides to “motivate and structure” historical inquiry through comparing the film with other historical resources, similar to what was done with the KWL charts.  The film Islam: Empire of Faith was used by the teacher for this activity.  After viewing the film the author purposely gave the students statements that agree with the film, but contradict a second source that the students were given.  He reasons that this is important because it causes the students to see that there are sometimes considerable differences in the context of historical sources, and historical accounts are interpretive, so meaningful studies of history must sometimes be controversial.

The author found that both of these strategies were very helpful in creating scaffolding to help middle school students to build on their prior knowledge and then search for personally meaningful questions about the historical content observed in the films.  This scaffolding is important because the average middle school student does not have the ability to “carry out in-depth, disciplined research and critical analysis and evaluation of information sources unless the teacher models these skills and guides the students in practicing them” (Woelders, 2007, p. 146).
References

Woelders, A. (2007, July/August). "It Makes You Think More When You Watch Things": Scaffolding for Historical Inquiry
Using Film in the Middle School Classroom. The Social Studies, 145-152.