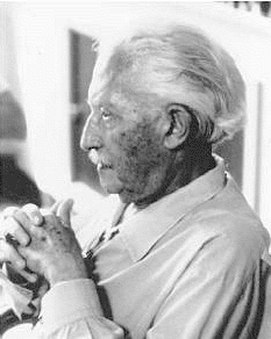 Erik Erikson (15 June 1902 – 12 May 1994)
Erik Erikson was a German-born American developmental psychologist and psychoanalyst known for his theory on psychosocial development of human beings. Erikson was born on June 15, 1902, in Frankfurt, Germany, of Danish parents. The common story was that his mother and father had separated before his birth, but the closely guarded fact was that he was his mother's child from an extramarital union. He never saw his birth father or his mother's first husband. When he was 3, his mother was married to his pediatrician, Dr. Theodore Homburger, and throughout his youth he was known as Erik Homburger. He did not learn about his parentage until his teen-age years, "and it was a secret my mother and I shared," (NY Times, 1994). Adding to the confusion, his adoptive father was Jewish and his mother's heritage was Lutheran. With his analysis complete by 1933 and his formal training in psychoanalysis also finished, Erikson left Vienna for the United States. He had a presentiment, he said, of the Nazi terror that was about to descend on Europe, and he was restive about developments in Freudianism, in which Freud's theories were being hardened into beliefs, "and the whole thing was becoming creedal," (NY Times, 1994).

The Erikson life-stage virtues, in the order of the stages in which they may be acquired, are:

In April of 1988, Professor Don Hamachek, of Michigan State University, published an article in the Journal of Counseling ad Development in which he created a set of criteria developed within Erikson’s first five psychosocial stages that would help in evaluating self-concept and ego development.  In his article, Professor Hamachek points out the weaknesses in Erickson’s stages of development, which is a lack of criteria about what behaviors to look for during each stage that would allow one to evaluate the status of a person’s progress through these stages.  The article includes five tables with ten characteristics for each of the two parts of the five stages (i.e. ten characteristics for Trust and ten for Mistrust in Stage 1). In the development of these criteria Professor Hamachek cautions that both these criteria and Erikson’s stages of development are “highlighting expressions of behavior that are likely to be associated with positive and negative ego development” (Hamachek, p. 360). The criteria presented in this article may not be crucial in the development of all people the same way, and they need to be tested and researched.